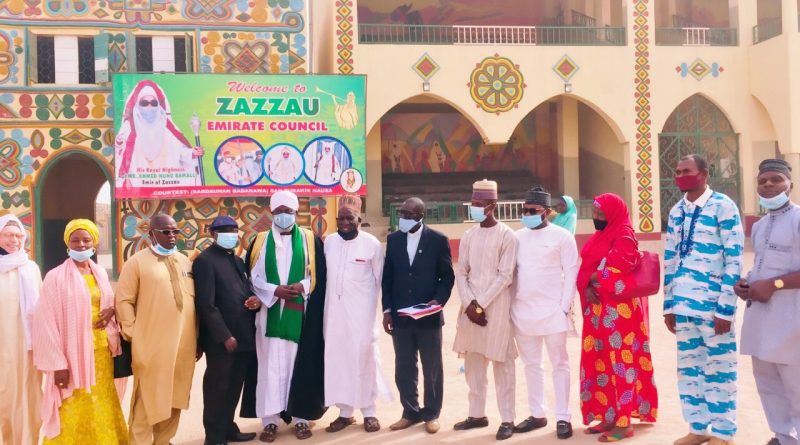 Kaduna state council of chiefs is to partner with Interfaith Mediation Center Kaduna to train traditional leaders on conflict resolution and management.

The chairman council of chiefs and Emir of zazzau, Ambassador Ahmad Nuhu Bamalli made this known when he received the Co-executive Directors of Interfaith Mediation Center (IMC) and others at his palace in Zaria.

The Emir of Zazzau, Ambassador Ahmad Nuhu Bamalli explained that the center have a vital role to play in the management of peace and unity across the nation.

He assured management of the center that the emirate is always ready to join hands in the maintenance of peace and unity in the country.

He asked the center to forward all the necessary documents as regards to the ongoing CIPP program for the palace council to look into it.

The Emir stressed the need for Nigerians to imbibed the culture of assisting the security operatives with necessary information to nip crime in the Country.

Earlier the Co-executive Directors of the center  Imam Dr. Muhammad Nurayn Ashafa and Reverend Dr. James  Movel Wuye pointed out that the center had resolved many conflict across the nation.

They said that the center is planning to train members of the zazzau emirate and district heads on new techniques on  Traditional approach to conflict resolution.

They also noted that the center is currently working on a project known as Community Initiative to Promote Peace (CIPP) which has been involved in resolving conflicts among the religious and ethnic groups in some state like Benue, Plateau, Kaduna, Katsina, Kogi and Kano among others.

Introduction Considering the persistent violence mostly perpetuated by some section of community members, which is mostly and actively committed by