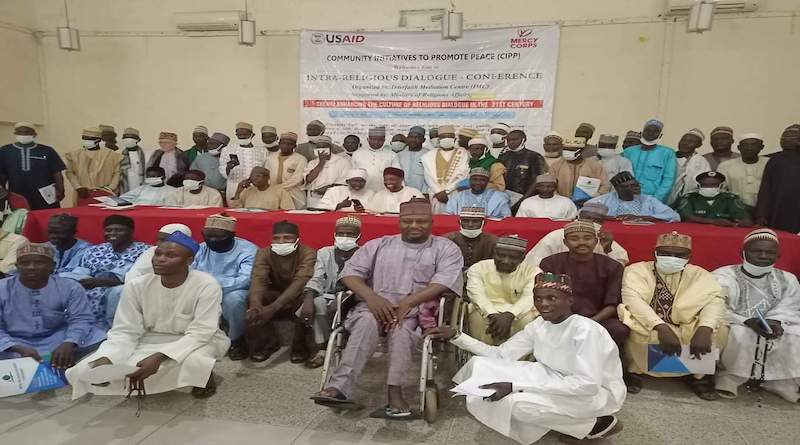 1. To build the capacity of stakeholders to resist extremism of Islamic teachings

3. To identify early signs of extremism and radicalization

5. To set up North-West Peace Intra-Committee and signing of peace agreements.

The conference had a robust discussion on pertinent issues relating to Islamic ethics on dialogue, with aim of understanding from various schools of thoughts and practices of one another towards reducing misunderstanding, misconception, accusation and extremism by formulating measures to enhance tolerance, mutual understanding and peaceful coexistence. Areas of communality in religious practices and beliefs to be emphasize among different sects. Issues IdentifiedThe conference recognizes the following issues of concern bordering on intra religious dialogueThere is high level of polarization among different sects by Islamic religious leaders Self centeredness by religious leadersHigh level ignorance among the followership Lack of reciprocity of respect from the adherents of different sectsDeclaration of apostasy by some religious scholars and followers

The need for more intra religious dialogue among the religious leaders.The ethics of religious dialogue among the Muslim scholars, and the principle of jurisprudence should always be appliedThe religious leaders should leads with example their words should be translated with their actions, Islamic brotherhood and unity should not be compromised.The followers should train on religious tolerance and respect to each other irrespective of differences.The need to encourage the followers to seek for knowledge. The tendencies of declaring other as Kafir on trivial issues of differences should be condemned by all sects.Pertinent to understand the difference among Imams, scholars from religious leadershipPrayers for the nation is vital as a result of promoting peaceful co-existence among various sects   Government should plays its role as a result of providing good leadership and to enforce rules of respect one another Need for scholars to meet at all times and discourse issues relating to Islamic matters and peaceful co-existence and not wait until time of sighting the moon for Ramadan.

The committee thanks the participants and organizers of this program, the funders, Interfaith Mediation Centre, Mercy Corps and other partners that contributed to the success of this Workshop in Kano.

Introduction Considering the persistent violence mostly perpetuated by some section of community members, which is mostly and actively committed by